The Tale of King Arthur Sword - The Legendary Excalibur!

King Arthur sword is actually known as excalibur sword. It is a popular sword today, but do you know the facts behind this sword?
Excalibur is the sword of an Arthurian Legend, King Arthur. The sword is believed to have magical powers. It is considered a mark of rightful sovereignty of King Arthur of Great Britain.
A few legends believe that it is the sword in the stone while a few don’t.
King Arthur sword was first mentioned in the Welsh legends. It was also popularly mentioned in Culhwch and Olwens.
In Culhwch and Olwens, this sword is held by Arthur as the most prestigious thing. Similarly, there are many other prose stories in which the sword is discussed. Medieval manuscripts contain a lot of stories around this sword.
This has led to immense popularity of excalibur sword around the world. People are interested in the sword due to a legendary tale associated with it.
In this article, we will discuss the King Arthur Sword, the story behind it and it's legacy. And we start with a short description of the sword.

Excalibur is the sword of the legendary King Arthur. This sword was first discussed in the iconic work of Thomas Malory, Le Morte D’Arthur. It was first published in 1485 CE.
However, this sword was actually introduced in the History of the Kings of Britain by Geoffrey of Monmouth. 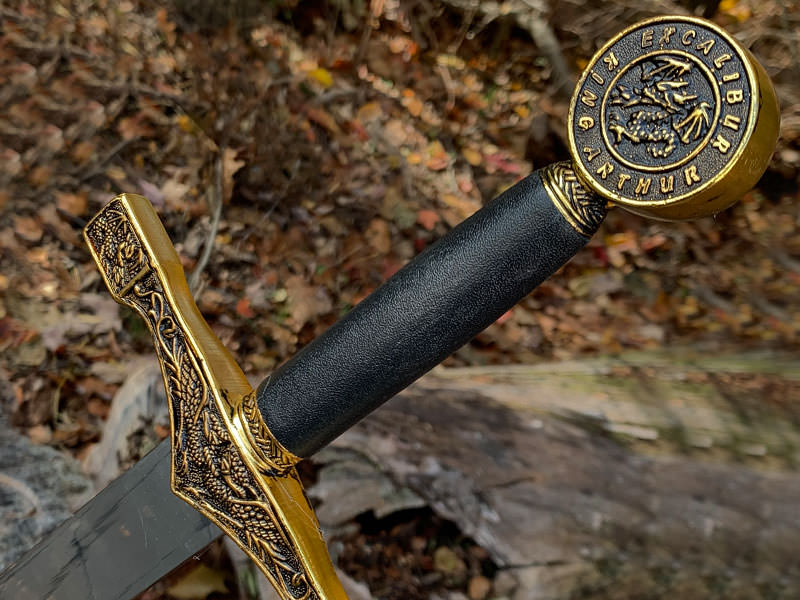 King Arthur sword i-e excalibur is a powerful weapon. It has the reputation of the sword of the greatest warrior in every story it features.
Just like several other powerful and magical swords in mythology, it has been considered as a single hero. Hence, it must not be given into the hands of the enemies considering its immense power.
As far as excalibur is concerned, when King Arthur was dying of his injuries after an intense battle with Mordred, it should have been returned to its original source i-e the Lady of the Lake.
So, this is a sword with some unbelievable power, and this is enough to urge enthusiasts of today to be crazy for this sword.

The original name of the King Arthur sword was Excalibur. The word “Excalibur” originated in the work “Culhwch and Olwen” from a collection of Welsh legends and Mabinogian.
The date of composition of this work is believed to be around 1100 CE.
The Mabinogion does not exist in many manuscripts, but those from the 14th and 13th centuries. By the way, a few scholars believe that it existed in 1200 CE.
In this particular tale, the King Arthur Sword is known as Caledfwlch which comes from an Irish mythological blade.
The name of the sword changed with respect to time and eventually became Escalibor. However, when the Arthurian Legend was translated in English, it was the first time the sword was called Excalibur.
So, this is how this popular sword got its name, the Excalibur.

The King Arthur sword was first obtained by the King after he was advised by his advisor called Merlin. However, there are claims that two excalibur swords existed at that time.
One was the sword that Merlin put in the stone, and the other was the one Merlin brought to Arthur.
The first excalibur was put into a stone by Merlin, and he said that the one who takes this sword would take the throne. Unsurprisingly, young Arthur succeeded in doing so.
The other excalibur sword was located at a lake considered as a magical lake. This was the lake where the Lady of the Lake presented the sword to King Arthur.
This sword was made by Avalonian elf. However, it was later stolen by his sister. At that time, the scabbard of the sword was lost as well.
During the battle of Camlann, King Arthur was hurt and he asked Bedwyzr to take the sword to the lake.
Caladfwlch was one of the earliest names of King Arthur sword. This word comes from Calad Blog which is a Welsh word and means hard lightning.
However, later on the name was changed and became Caliburn (named by Geoffrey of Monmouth). It is due to French that we know it today as excalibur.
The legend of King Arthur Sword is identical to an Irish hero called Chulainn whose sword was known as Caladbolg. Interesting thing is that all these swords were constructed by an elf.
At times, this sword is also called Gofannon or Wayland.
Another mystic King Arthur Sword is called Clarent. This is the sword of peace unlike Excalibur which is a sword of war.
Clarent was used for peaceful purposes which is why it never achieve such fame. On the other hand, Excalibur became popular because it was used for defending Camelot.
However, clarent sword also played a crucial role A traitor Mordred, however, stole it and used it against King Arthur to cause his death.
In a few tales of King Arthur Sword, it is believed that the sword was established in dragon fire.

The Strength of King Arthur Sword

An important point to consider is the power or strength of the King Arthur Sword. Since it is a magical sword, it possesses some unbelievable powers.
Caliburn, the earlier excalibur sword, was determined as the best of the swords because it was made within the Avalon isle. Also, it is listed along with other weapons of Arthur as a significant item by Geoffrey.
Excalibur is determined in a similar way in every version of the story. In the works of Malory, when King Arthur was attacked by King Lot, he was almost helpless until he used the power of his sword.
King Arthur confronted King Lot in the story by Malory and it appeared as if excalibur was similar sword to the one Arthur drew from the stone earlier. This has led to a confusion that these two weapons are similar; they are actually not!
In all these works, you will get to know different stories regarding how King Arthur got the possession of his sword.
In Merlin, the King Arthur Sword was put into a stone and it was said that only a true king is capable of pulling it out. So, Arthur being the true king managed to pull it out and hence was appointed as the king of Uther Pendragon.
According to the continuation of Vulgate Merlin, the sword was believed to be the excalibur. However, later on it was presented to King Arthur after he became a king by the Lady of the Lake.
At the time Arthur was about to die, he ordered Griflet to throw the sword in an enchanted lake but he refused a couple of times.
When asked for the third time, he threw it but the Lady of the lake emerged from the water and caught it.
When the King Arthur sword was drawn for the very first time, the blade of the sword blinded his enemies because it featured a light equal to thirty torches.
And not just the blade, the scabbard of the sword was also a magical one. It is believed that the wounds did not bleed at all as far as the bearer of the scabbard is concerned.
In addition, it is believed that the scabbard had a few inscriptions on its two sides. One side had “cast me away” while the other hand “take me”.
Casting the sword (in the lake) had a historical origin. The ancient Britons tended to throw a warrior’s possessions in the lake as a gift to the gods. As a result, they were granted a safe transit to the afterlife.

The Story of the Sword in the Stone

A French Poet known as Robert de Boron added the concept of Sword in the Stone in the 12th century to the Arthurian Legend.
The poet expressed the King Arthur sword as anchored in the anvil which was changed to stone later on. 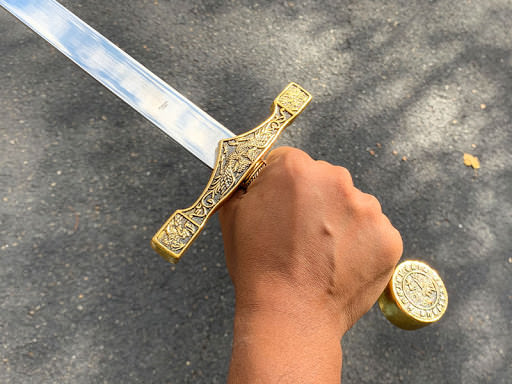 In the Vulgate Cycle of the legend, the sword drawn by Arthur from that stone was differentiated from the excalibur and that tradition continued.
Malory’s work repeated the similar concept of differences.
Though the King Arthur sword was determined as excalibur in the earlier versions of Malory’s works, it was later cleared that it wasn’t the excalibur because this sword was broken during King Arthur’s battle with Pellinore.
As the sword of King Arthur was broken, Pellinore was able to get the better of him. He told Arthur to yield he didn’t.
For saving both lives, Merlin put Pellinore to sleep and as a result Arthur received the real excalibur from the Lady of the Lake.

King Arthur excalibur sword even more popular than the powerful scabbard and became a symbol of power and virtue of King Arthur. Several works later on, such as Song of Roland and El Cid etc. drew on the symbolism of excalibur for their superheroes.
A popular trilogy The Lord of the Rings by J.R.R Tolkien relied on the symbolism of the similarly powerful sword that could be made a way to convey the message of return of the rightful kind.
This plot is exactly similar to the concept of sword in the stone. Such is the legacy of the King Arthur Sword.
Today, excalibur is one of the most popular and widely recognized swords. It has turned up as a favorite collectible for enthusiasts.
And not just enthusiasts, cosplayers are also crazy for this sword. They love to hold this sword as a part of their costume. When they replicate or play the character of King Arthur, they hold this sword to adopt his character.
There is a massive selection of this sword available in the market these days. You are not an enthusiast unless you have this magical sword in your collection.
So, get a replica King Arthur Sword to enrich your collection with the most popular and unbelievably powerful swords for sale.
SHARE THIS POST
Previous Post
Next Post 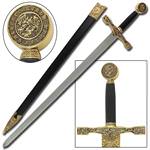 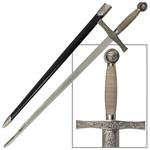 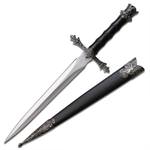