Some Facts About the Evolution of Tactical Knives

I have a huge collection of knives as I am quite fond of them but I recently realized that my knives collection was missing a very important set of knives known as the tactical knives.

Before going any further, let us at first, understand what does the term “tactical” means over here.

Is this just another strategy of the marketers of its original manufacturers or does it really mean something? Because from what I understand, the term tactical definitely leads us to believe that these knives are used for tactical purposes.

The truth was that none of them knew the right answer. That was when I decided to turn to the person who wrote an entire book just on the tactical knife. Yes, I am talking about Sir Robert Terzuola.

He clearly states that a tactical knife has the following distinguishing features:

A tactical knife can be a fixed blade knife and it can be a folding knife as well. It depends on you which one do you choose to have based on your preferences and needs.

The History of Tactical Knives

For centuries or I should say, since the beginning of times, human beings have been using knives. Those knives may not be like the knives of the modern world but they also served the same purpose and were used for utility purposes or for personal protection.

The knives may have been designed as EDC tools but there we cannot deny the fact that the conflicts between human beings led to their use as a combat weapon. So, this conflict led to the foundation of a tactical knife.

The history of knives and their evolution is quite cumbersome but we will discuss it today in detail to understand more about tactical blades.

The knives or tools designed like them are known to have their origins from the Paleolithic era when human beings used to live in caves. These were the ancient times when there was no civilization and no society.

People used to make their own tools by hand which was not very efficient. The tools which we call knives used to be made up of flint or mostly stones and their edges were made which gave them the shape of glass shards.

These knives were not that efficient and refined as modern-day knives, actually, there is no comparison between the two at all.

At first, these tools were just pieces of rocks with no distinct shapes and then they were refined into a spear-like structure with arrowheads but still, they were not as efficient as today’s knives.

This led to the creation of daggers when leather was wrapped around the handles of these arrowheads. These were the cool knives of the Stone Age.

The Bronze Age came soon after the Stone Age, somewhere around 3,000 BCE and it is named so because of the popularity and usage of meta to construct tools and weapons.

This era took the concept of knives to a whole new level and replaced the stone blades with the metal ones.

The metal was strong and sharp as well which led to efficient knives which were capable of cutting and slicing things properly. The two metals, Bronze and Copper were frequently used during that time.

This was a time when the true art of the construction of knives actually began and tactical knives were a part of it too. Daggers were made out of copper metal and became quite popular throughout the world.

Even though the efficiency of these knives increased considerably but their designs were still simple and most of the daggers just had a blade designed like a triangle, totally flat with a pointed tip, sticking out of a handle.

The copper was soon replaced by Bronze, which was a much more durable and sturdy metal than Copper.

These blades were definitely not like the ones which we have today but they served the people of that age quite well and in many ways.

This was the time somewhere around 1200 BCE in which the human race made significant progressions and developmental changes occurred especially when it came to tools and weapons.

Why is that so? It was because of the steel with the help of which people started making more durable utility tools and weapons as well especially tactical blade which was used in combats.

This was also the time when the Romans invaded entire Europe and took any means to make their expansion possible.

A huge variety of different knives were constructed during this era and these knives led to the foundation of modern knives. Different shapes of a knife’s blade were designed and each was given a different name.

For example, there used to be a knife known by the name of “Seax” which was the blade of a warrior and featured the shape of a long dagger. This blade was used both as a fighting weapon and as a utility knife.

There were some other types of daggers as well which were famous at that time known as the Bollock and the Rondel. Some of these knives blades were effective for thrusting and some for cutting, whereas some of them were only intended for piercing.

So, there was quite a variety of knives during the Iron Age. One of the most eminent knives of the Iron Age was the Roman Pugio.

We can say that it was a shorter version of the sword which we today know as the Roman Gladiator Sword, carried by the Gladiators of Rome all those years ago.

The Roman Pugio was a weapon which was used for close-quarter combats and by the people of Rome; thus they served as tactical knives to the soldiers of ancient Rome. They were used to perform assassinations or they were used to suicide.

The knives kept on evolving even after the fall of the Roman Empire. Various advancements were made and the advancements in the field of knife making was also one of them.

Some of these eminent tactical blades are discussed below. Let us have a look.

The karambit knife is one of the most prominent combat knives. But this was not why it was designed. It was designed by the people of Minangkabau of Indonesia as a farming tool.

It was designed after the claw of a tiger and the curved blade was actually designed like the alphabet “C”.

So, yes a farmer’s tool turned into one of the most aggressive blades of the world.

The Buck 110 is one of the popular Buck knives ever constructed. This blade is used to stab and thrust specifically. But apart from its use in combat, it can also be used as a tool for hunting.

The Buck 110 has a clip point and this thin point can be broken down easily if pressure is applied on it. So, yes that is a drawback of the Buck 110. It was also a little bit heavy to carry around as well especially in the pockets.

However, during the 1980s, an ex-military man known as Al Mar took an interest in this knife and started working with Colonel Rowe to make a knife which has the benefits of the Buck 110 but is easier to carry and would also be a pocket knife instead of having a fixed blade.

As a result of their effort, the Al Mar SERE was constructed which was a very effective tank knife of that time. It was somewhere around twenty-five point five centimeters in length.

The blade was strong and powerful which is why it required two hands to open this folding knife.

However, if you practiced a little, then it could be easily opened with one hand as well because of the smoothness of mechanism of this tactical knife. This knife was one of the first forms of modern tactical knives.

The BC-41 was a knuckle duster knife and was used by the British military during World War 2. It was used in close-quarter engagements and was used to fight the enemy with brute force.

This tactical knife was constructed in England and has its designs done by Charles Clements.

So, yes he was the brain behind this knife. The knife features durable knuckles which are capable of throwing some magnificent punches and the blade of this knife had a clip point.

The total length of this knife is about nine inches and it is one of its kind.

The FS Fighting Knife is another name for Fairbairn Sykes Fighting Knife. The knife was constructed in 1941 and was designed specifically for the commandos and marine officers of Britain.

Most of the knives are used either for slashing or for thrusting, but this knife was effective for both slashing and stabbing.

This knife was designed by Eric Sykes and Ewart Fairbairn which is why it was named as the Fairbairn Sykes knife. It was specifically designed to be used in combats and its design closely matched with that of a dagger.

These tactical knives are still bought and collected by people all over the world.

The LHR Combat knife was designed by the two most notorious knife makers known by the name of William W. Harsey Jr. and Chris Reeve. The knife was designed to cater to the needs of military people and was specifically used in close-quarter engagements.

These tactical knives also feature a safety release built-in) and have a total length of about 12.5 inches. The grip of this knife is textured and it is available at very cheap rates so soldiers can get it for themselves easily.

The Bundeswehr Advanced Combat Knife is a blade that can be used for multiple reasons but its main purpose is its use as a fighting military knife. It was designed in a modern way so as to cater to the needs of military people of the modern age.

This blade was made in Germany and the German military uses this weapon. These tactical knives are well known because of their multi-work plan and lightweight.

Other than being a well-honed blade, different capacities incorporate a screwdriver, general saw, flexible wire cutters, and a bottle opener. It features a cavity in the handle, a defensive top for the cutting board which prove to be quite useful.

There is a snap-on strap as well which allows the user to separate the harness from the sheath of the knife easily and fastly.

This blade is temperature safe from minus forty-degree celsius to plus eighty-degree celsius, impervious to substance and natural impacts. The complete length of the blade is around three hundred and five millimeters, and it weighs somewhere around four hundred and thirty grams.

So, this was a brief insight into the history and evolution of tactical knives until today. I hope you enjoyed it and gained lots of interesting information about these amazing knives. 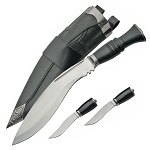 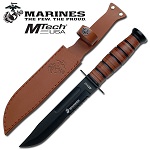 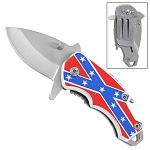 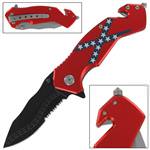 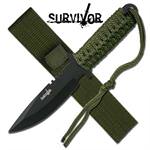 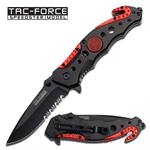 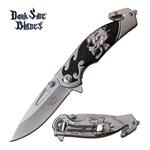 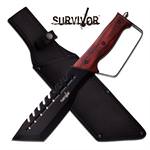 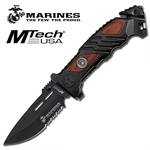 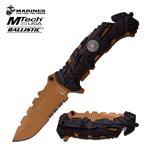 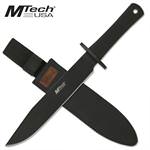 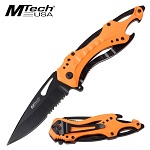