A long time ago, we had cool knives as our ultimate fighting weapons. Later on, they were replaced by swords, and then they became secondary fighting weapons.
With the passage of time, knives became the essential tools as well as they served in plenty of tasks on a routine basis.
Today, knives are pretty necessary as well. They might have become old-fashioned combat weapons, but they are still a necessary part of our daily lives.
This is why we have such a vast collection of knives. One of the most popular knives today is the karambit knife which is recognized as an all rounder knife capable of use for diverse purposes.
In this article, we are in fact reviewing the karambit knife, We shall explore its history, look at it features, weight its benefits and explore its uses.
So, let’s begin with a brief review of karambit knife in terms of its history, features, types, uses and benefits!

Karambit knife is believed to be hailed from the Philippines. This is a popular opinion as per most historians.
However, a few historians believe that the birthplace of karambit is actually France. French still claim to produce the earliest version of a karambit.
Anyways, let’s focus on the most popular belief that it was first manufactured and used in the Philippines.
Surprisingly, karambit served as an agricultural tool in the Philippines. People used it for reaping different crops such as wheat and rice.
Moreover, women carried and used it as self defense knives. It was also adopted by the people as a pure fighting knife.
With a curved blade, it was not a great weapon for stabbing and thrusting, but it was excellent for slashing actions.
Later on, it was adopted as a cutting weapon as well even though it was not great for precise cutting. So, that’s all we have from the history of karambit knife.

The most significant feature of a karambit knife is its curved blade. This is in fact what makes it recognizable.
A karambit always have a curved blade. And this is not a slight curve, but a great curve.

Another significant feature of karambit knife is the safety ring. There is a small ring attached to the handle of the knife. This is also known as tactical ring.
This enables the user to wear the knife. The purpose of the safety ring is to enable a stronger grip on the knife.

The blade of a karambit knife is first of all curved, and importantly, it has a point. The combination of a curved and pointed blade makes it a great slashing knife. But, it can also be used for stabbing and thrusting.

The modern version of karambit knife is the folding karambit. This is the one with a foldable blade.
It is identical to fixed blade karambit in terms of blade design and shape. There is a small curved blade, but it is movable and foldable inside the handle.
This further lessens the size of the knife. Hence, it becomes easier to carry. It is also known as pocket karambit because it can be carried in the pocket without a sheath.
Folding karambit knife is more popular these days because it can be used for everyday cutting work and self defense (as it fulfills self defense needs with its sturdy blade and ease of carry).

Interestingly, karambit knife originally served as  an agricultural tool. It was handy in reaping crops like wheat and rice. Even today, you can use it for similar purposes such as agricultural work.

Karambit knife is an easier knife for playing different tricks. Those tricksters who like playing tricks with knives find it easier and more comfortable for practicing tricks.
Thanks to the safety ring and ergonomic handle, grip and transition tricks can be played with this knife.

Both fixed blade and folding blade karambit knives are excellent for self defense. They feature sturdy blades that can injure the attackers and ensure your survival.
Also, they allow you to stay equipped with a weapon to deal with the attackers.

Remember karambit knife was originally a combat knife. Due to its safety ring, it is impossible to disarm the user. So, in a close quarter combat, this feature is very useful.

Though karambit knife does not allow precise cutting, but it can still be used for utility cutting.
You can carry it as your knife for camping work. You can cut wires, ropes and other materials with its sturdy blade.

Karambit knife is not very handy when it comes to stabbing and thrusting. But, it is a great slashing knife.

Karambit knife possesses some tactical features as well. The basic tactical knives feature is the safety ring. Then, there is a pocket clip and a safety lock.
These tactical features enable it to be used for tactical purposes. It is a great knife for a secret agent who can use it for silent killing with its slashing abilities.
Also, you can carry the foldable version of this knife quite easily with its pocket clip. Moreover, it can be used in emergency situations such as breaking glass.

The greatest advantage of karambit knife is that it is extremely small and hence it becomes easy to carry.
Whether it is the fixed blade version or folding version. Smaller size is constant. And in the case of folding blade, you can even carry it in your pocket without a sheath.

Karambit knife provides a solid grip on the knife, thanks to the ergonomic handle. It is comfortable to handle in your hand.
If you want to use this knife for a long time consistently, you won’t ever feel uncomfortable and threatened with the knife.

A Knife for Every Sort of User

A splendid feature of a karambit knife is that it is equally useful for every user. If your aim is to use it for self defense, this is the best knife for this purpose.
For tricksters, it is an easier knife for playing and practicing tricks. Utility tasks are also accomplished with this knife. So, it basically serves all sorts of users.

If you are not a fan of using knives for combat and self defense. You can place a few pieces of karambit as a gorgeous decoration thing.
Remember it is a historical knife that hails from the Philippines. So, you can express your love and enthusiasm for the historical knife.

We can easily conclude from our review that karambit knife is an exceptional knife with certain unmatchable features. The history suggests that it is a great fighting and combat knife.
Also, it is a knife that can be used for playing tricks. The safety ring makes it easier to grip and control.
Furthermore, this knife makes an effective self defense weapon. Though it is not as great stabbing and thrusting knife, but excellent for slashing actions.
Precise cutting is not popular with the knife, but you can still use it for utility cutting.
However, in the modern days, you must opt for folding karambit knife because it offers maximum advantages ranging from ease of carry to tactical uses.
SHARE THIS POST
Previous Post
Next Post 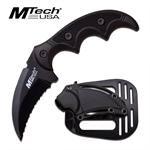 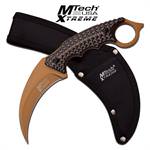 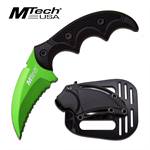 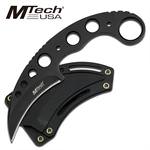 Mtech Tactical Neck Knife Black
This tactical neck knife provides instant defense right around your neck! The 3 blade is razor sharp, and can be quickly accessed from the quick-release, impact-resistant sheath. 7" Overall in length.
$6.99
2706
In Stock.
Add To Cart Add To Cart Add To Cart 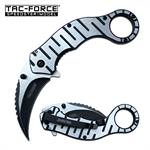 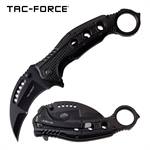