Nunchucks: All You Need to Know About This Fascinating Weapon

Nunchucks are one of the most popular weapons used in martial arts and hold a great significance in this regard as well. It is a favorite tool of the martial artists and is used frequently in Karate.

Although the history of Nunchucks, also known as Nunchaku is not that famous and documented like a Katana, yet they have are fascinating weapons with a hazy history and some amazing practicing techniques.

Furthermore, the ban put on them by the government has made them more interesting for us and people try to solve the mystery behind them.

There are so many questions which one ventures out to explore the answers of. For example, what are the real origins of Nunchucks? Where did they come from? Why is there a ban on them?

Are they dangerous? Can they be used for self-defense? How can we use Nunchaku? To help you find the answers to all of these questions, we have compiled a guide for you. So, let us begin and start our journey by having a brief introduction of Nunchucks.

Nunchucks feature a unique design and structure. They resemble two rod-like sticks which are connected to each other with the help of a metallic chain. The Nunchaku are used in fighting and they are also used for self-defense by people.

Although very few people use them yet that does not change the fact that if properly used, Nunchaku can be quite effective and fantastic.

The construction material of Nunchaku can differ. Some of them are made up of metal, while the others are made up of either plastic or wood. Each one of them has its own function and use.

For example, if we talk about Metal Nunchucks, then we come to know that they are used in fights and combats.

They are made up of metal and this is why they are dangerous among all. The wooden Nunchucks are made up of wood and are used for learning the art of using Nunchaku, so we can say that they are training weapons.

The third ones are the plastic Nunchaku, made up of plastic and used as toys for children or as replica weapons to be used in cosplay events and LARP (Live Action Role Play).

The specialists of history and journalists having immense knowledge on combative techniques hold a couple of clashing convictions about the genuine roots of the modern-day Nunchucks.

While most appear to concur that it presumably started as a tool in China and has very less uses as a weapon.

Soon, the people in Okinawa started using it as a self-defense weapon, what sort of construction material was used in making it initially, and who was its inventor, stays a mystery until today.

However, people have given their views on the subject and there are some different stories related to the origins of these weapons.

Some accept that it was a horticultural device that was formed into a battle device by people who were not allowed access to progressively conventional weapons.

However, there was another argument that this design would have made the Nunchaku tricks and tips unfeasible to perform the tasks of agriculture.

There's additionally a hypothesis that Nunchakus were utilized by native people for self-defense who needed to shield themselves from burglary.

What we cannot deny is that these initially these weapons were immensely used for hand to hand fighting, then turned into a piece of both Jiu-Jitsu and Karate training, and somewhere along the years, turned into the Nunchucks that we see today.

But the most promising one is the one which states that it was invented by the last Chinese emperor of the Sung Dynasty as a weapon which he intended to use against the Mongolian emperor who drove him out of his own estate by taking over.

The Chinese emperor and his soldiers went to a nearby village and started living there.

The people of that village welcomed them with open arms and the emperor ordered his soldiers to go and work in the fields with the villagers to help them out.

One day when he was out in the fields taking a walk, his eyes fell upon the agricultural tool which the villagers were using for farming. That is when an idea took root in his mind and he immediately went back to the house and asked for a similar agricultural tool.

After some days he invented his own weapon just like the agricultural tool he saw, devised his own techniques to use it against someone and trained his soldiers on them as well.

It is said that this weapon set the base of the modern-day Nunchucks but was quite long in length. He then marched with his enemy on his land and defeated him and his men with these weapons.

It was a huge success. Since then, numerous changes have been made in the original design of these weapons but the overall concept of them remained the same.

The Nunchakus which are available to us nowadays are shorter in length than the original ones and are much easier to use as well.

Nunchucks and the Modern World

Nunchaku has been used as a pop icon as well and the one introducing them to the modern world is Bruce Lee. As we all know that Bruce Lee is a prominent figure of the movie industry and of the community of martial artists as well.

The Nunchaku was initially famous only in the martial arts but when Bruce Lee introduced them to the world in his super hit movie “Enter the Dragon”, they became globally famous.

Nunchucks have been quite popular since then, in both western and eastern community. It started to get featured in video games i.e. Final Fantasy, Mortal Kombat, etc, numerous movies i.e. Black Dynamite, Fist of Fury, etc. and even in the comics as well.

If you have ever had the chance to watch the interesting Teenage Mutant Ninja Turtles, then you would have seen these fascinating weapons there as well as Michaelangelo’s most prized possession.

The nunchaku isn't the best device in combat and battle circumstances today, yet it is an astounding preparing help for military craftsmen hoping to improve their stance and grow quicker hand development.

Nunchaku is additionally a prevalent weapon in rivalries held in spots where the weapon is allowed and you must know where it is not allowed to use to avoid doing anything that is against the law.

For example, Nunchucks are not allowed to be used in Norway, Poland, Spain, Russia, Germany, Chile and some of the areas of the United States of America and Australia. This information can change however as laws are subject to change.

Nunchucks and the Martial Arts

Nunchakus are utilized in Karate most of the times, other arts including Filipino combative techniques. Some other arts like Hapkido and Tae Kwon Do have made use of this weapon as well.

Each of them has offered its own interpretation on how to use the weapon in the most proper way in combat training.

Nunchakus are additionally utilized in a hand to hand fighting craftsmanship called free-form nunchaku which is also quite similar to another one known as Nunchaku-do.

Youth all over the world take part in such projects which fall under the name of World Nunchaku Association.

Nunchucks are not only used in championships and combats but rather they are also used in self-defense and this is also one of the main reasons for their training. It is advised to not use these as self-defense weapons even one does not know how to use them.

There are certain techniques of Nunchaku which help an individual to use it and fight with it. Without learning these techniques, Nunchucks must not be used as there are more chances that you hurt yourself instead of your adversary.

This is also the reason that special institutions have been set up which teach individuals on using Nunchaku in the right way and help learn them all techniques ranging from basic to advanced level.

In order to train yourself in this art, you must be determined and very cautious about what you are doing. Ultimately, you will find a considerable change and improvement in your stance, reflexes and brain activity.

Nunchucks prove to be really good and effective weapons but they also come with drawbacks. One must not become blind to them and should also keep an eye on the new laws and legalities related to these weapons.

Also, make sure that you only use wooden Nunchucks for training purposes and when you are sure that you have got a grip on a particular trick, only then try it with metal Nunchaku.

This will keep you safe and the people around you as well. After reading all this about Nunchaku, what do you think about them? Did you find any interest in them or not? 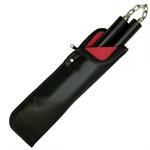 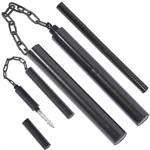 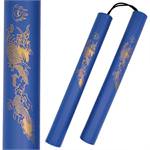 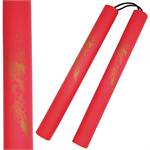 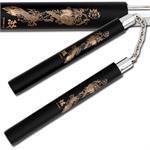 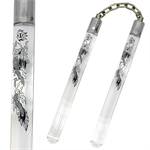 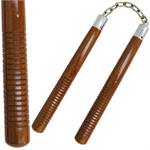 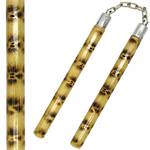 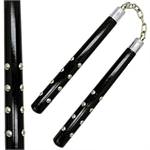 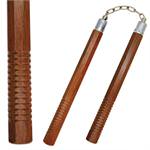 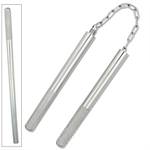 11 Inch Silver Aluminum Convertible Nunchaku
This Converta Nunchaku had a round design and measures 12 inches. When the handles are screwed together, it converts into a 24" police baton.
$4.99
0
Out of Stock.