How to Sharpen a Pocket Knife?

Do you know what a pocket knife is? It is a folding knife having a movable blade which tucks itself inside the handle of the knife when it is closed.

The length of the blade of this knife is normally between five to fifteen centimeters.

I got hold of my first pocket knife when I was searching through the contents of my kitchen drawer at the age of eleven, one Sunday afternoon.

I was playing in my backyard before with my younger sister and we were making our very own slingshots for which we had to cut a drawstring to the desired length and attach it between the two wooden tongs which we had made out of broken twigs.

When I found the pocket knife in my kitchen drawer, I used it to cut the drawstring and it served this purpose quite well.

After then, I started carrying this knife with me wherever I went. It was small and compact, therefore, it was quite easy to conceal and carry it.

My parents also agreed that I should carry one with me to ensure my personal safety and to cater to emergency situations as well and I was old enough to not misuse it and put it to good use.

Although I never had to use it as a self-defense knives to help me perform a variety of utility tasks with such ease and convenience that I was thankful that I bumped into this amazing utility tool. It was a magical wand for me and I considered it to be my right hand.

The blade was small and at that age, it was easy for me to handle it and use it as well. I used to cut ropes, small fruits, and vegetables, some strings with it. And later on, I learned some more things to do with it i.e. how to pick a lock and how to turn it into a makeshift screwdriver.

Yes, I have always been quite creative and I devised creative ways to use my pocket knife.

Knives are the best Everyday Carry tools and they must be used as a utility tool only. However, under emergent conditions, these knives can be used as a weapon for self-defense.

You can keep a pocket knife in your backpack or under your socks or tie it around your neck as a neck knife to help you out if you ever face a dangerous or an emergency situation.

Many people get themselves a pocket knife but are not aware of the fact that care must be given to the knife and it should be properly maintained, otherwise it will damage your knife and it will start to rust and corrode, leaving the blade useless.

I also learned this lesson the hard way when my first pocket knife got damaged because I didn’t use to take care of it.

This is done when the blade loses its edge and the blades made up of stainless steel mostly face this issue as they are corrosion resistant but they lose their edge quickly.

So, let us have a look at some steps which will help us sharpen our knife, bringing its blade back to its original efficiency and effectiveness.

Things Needed for Sharpening a Knife

There are so many ways of sharpening a knife and many tools are used for this purpose. Let us have a look at them.

Sharpening the blade of a knife with stones is by far the oldest method and is done with the help of stones which have diamond encrusted surfaces or the stones which are known as Japanese water stones.

First of all, you have to choose the sharpening stone for your knife, for this, you can try each one of them and then see which one provides the best results.

Never use a cheap quality knife for a knife which is of good quality, otherwise, you will just ruin it even more. A decent sharpening stone can be found somewhere around dollar ten and there is no need to spend on it more than this.

The sharper the blade of the pocket knife gets as you sharp it against the finer grit of the sharpening stone. First of all, you must sharp the knife with the rough grit and then with the fine grit.

The second tool used for sharpening a pocket knife is a lubricant. A lubricant can be anything from oil to water which when applied on the blade reduce the frictional heat that is produced from sharpening the knife.

The best lubricant that is used for this purpose is the mineral oil which properly cleans the debris from the knife after it is sharpened from a sharpening stone.

A decent lubricant can be bought in five dollars and it depends on the sharpening stone that whether you will find the need for a lubricant or not.

The following are the simple steps via which you can learn the art of sharpening a pocket knife.

Sharpen against the Rough Grit

And this is also the side from where you should start sharpening the blade of your knife.

The use of a lubricant with a sharpening stone is considered a very good practice. So, don’t forget to pour some lubricant over the stone and spread it there especially over the rough grit.

The best lubricant to serve this purpose is the mineral oil, however, you should make sure to not soak the stone in oil and just apply it.

Positioning the Blade of Knife

The next step is to position the blade properly. For this purpose, place the blade of the knife on the stone by keeping it totally flat and then maintain a proper and accurate angle of about ten to fifteen degrees by raising it about the stone.

Not all knives are sharpened on the same angle, rather different angles are used for sharpening different types of knives.

Generally, an angle of about ten to fifteen degrees is required for a pocket knife. The angle also determines the level of sharpness of the knife.

At this angle, you will get a knife with a blade to tend to your tasks of everyday routine.

However, it will not be as sharp as a scalpel even then too. Choosing and maintaining the right angle requires lots of practice and you will surely learn with time and you can always get the help from a sharpening guide.

Now you have to actually start the sharpening after setting it at the right angle.

You have to sharp as if you are carving off something and the best way here is to place the stone on a flat surface and sharp the blade by bringing it towards the stone rather than chipping away the blade with the stone.

If you are sharpening a blade whose length is more than that of your stone or if the blade has a curve in it, then try sweeping the blade in a sideways manner so you get a perfectly sharpened and even blade.

Perform this step for at least six to twelve times to get the perfect results possible.

Flip the Side of Blade

After the first side of the blade is done, flip it and then perform the same steps of sharpening on this side as well to receive the same results.

Make sure to sharpen both sides of the blade of the pocket knife by alternatively stroking them on the stone. This will keep both sides even.

Sharpen with the Fine Grit

So, now you must have a clear idea of sharpening your pocket knife. I hope that the above-mentioned instructions will help you sharpen your knife properly. 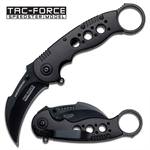 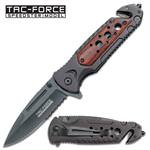 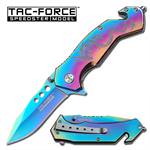 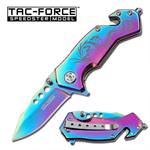 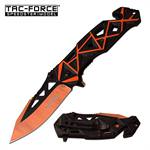