Everything About Sword Canes - Types and Uses

A sword cane is a cane that contains a sword inside it. The sword can be hidden within the cane, and then drawn out for use if needed. They have a long history and have been used for both fashion and self-defense. They were particularly popular in the 19th century, and are still made and used today by collectors and enthusiasts.
It is a cane with a hidden blade inside. The blade is typically made of metal and can be revealed by sliding the handle of the cane downward or by pressing a button. These canes were popular in the 18th and 19th centuries and were often used as self defense weapons. They are also sometimes referred to as walking canes or swordsticks.
The sword is typically a small, slender blade, and it is hidden inside the shaft of the cane. The handle of the cane is often used to grip the sword, and the blade can be revealed by unscrewing the handle or by sliding it out of the shaft. They are still made today and are collected by some people as novelty items. 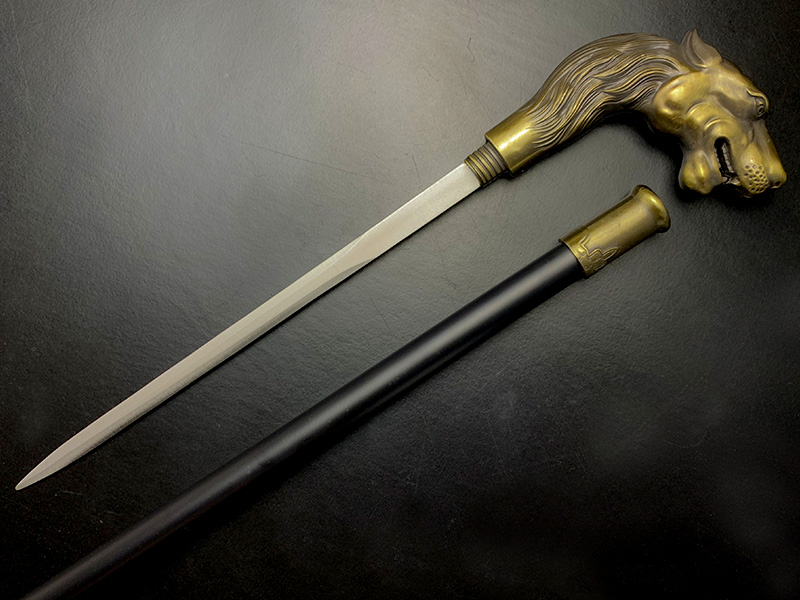 There are several types of these canes that are available or have been used in the past. Some common types include:

This type of sword cane has a long, thin blade that is similar to a rapier. It is designed for thrusting and is often used in fencing. A rapier cane is a type of cane that has a slender, sword-like blade hidden within the shaft of the cane.
It is a type of disguised weapon that was popular in the 18th and 19th centuries, particularly among gentlemen who wanted to be able to defend themselves while carrying a walking stick. Some rapier canes were designed to be used purely as a weapon, while others were intended to function as both a walking aid and a weapon.
The blade of a rapier cane is typically thin and sharp, and it is usually activated by pressing a button or pulling a lever on the handle of the cane. that has a concealed blade inside of it, typically a rapier, which is a type of sword characterized by a narrow, flexible blade and a complex hilt.
The rapier cane is designed to be used as a self-defense weapon, allowing the user to quickly draw the blade in the event of an attack. It is important to note that the use of a rapier cane or any other type of concealed weapon may be illegal in some areas, and it is always important to be aware of and follow the laws and regulations regarding weapons in your jurisdiction.

This type of cane has a curved blade that is similar to a saber. It is designed for slashing and is often used in cavalry combat.  A saber cane, also known as a sword cane, is a type of cane that has a concealed blade inside of it, typically a saber, which is a type of sword characterized by a curved, single-edged blade.
A saber cane is a type of weapon used by the Scots and Irish Luddites and other people, resembling a walking stick with a sharp point on the end and wires attached to it. Saber canes were used primarily in self-defense during riots, but they could also be used as weapons.
They have been described as "wooden swords", although their design is considerably more complex than swords. The Irish adopted their own form of saber cane which was traditionally made from the Yew tree, with blackthorn strapped around it for extra strength.

This type of cane has a shorter blade that is similar to a short sword. It is designed for both thrusting and slashing and is often used in close combat. A short cane sword is a type of cane that has a concealed blade inside of it, typically a short sword or a small sword.
This short sword is a type of sword that is typically between two and three feet in length and has a blade that is designed for thrusting rather than cutting. It is highly recommended that you purchase a short cane sword for added security. These swords are also handy to have if you are in an area where swords aren't allowed.
The blade and handle on the blade need to be super lightweight and durable so as not to affect the function of the cane. Blade length can vary from 8" all the way up to 26". They're really just like any other walking stick, but with a sharp sword hidden inside! They look like regular old canes — until they're opened, of course, which takes about five seconds at most. 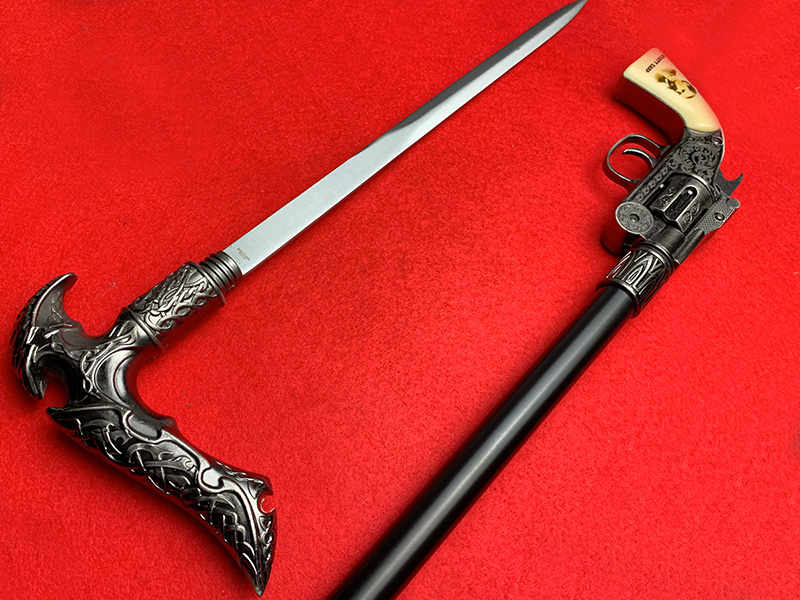 This type of cane is a regular walking stick that has a hidden blade inside. It is designed to be a discreet weapon that can be used for self-defense. A walking stick sword is a type of cane that has a concealed blade inside of it, typically a sword. The walking stick sword is designed to be used as a self-defense weapon, allowing the person to use it instantly if attacked.
A walking stick sword is a sword that fits in the bottom handle of a walking stick, giving the user an extended reach. They are also known as an optional extension or sword guard for the cane. The fighting form may have its origins in Italian fencing from around 1720 with the use of swords and canes as weapons, but they were later abandoned due to their impracticality.
They were reintroduced in 1908 by Harold Thompson who wished to combine fencing and cane fighting. The design has been refined over time and there are now several variations of designs being used today by various disciplines such as dance, martial arts, circus arts, and Olympic sports competitions like Modern Pentathlon.

This type of katana sword cane has a blade that is similar to a Japanese katana sword. It is designed for both cutting and thrusting and is often used in traditional Japanese sword fighting styles. A katana cane is a decorative fighting weapon, usually made to look like a sword cane.
The blade is on the end of the shaft and can be used for defense purposes. They are typically sold as novelty items and do not have any protective qualities. A katana cane was an institution in Japanese culture, especially during the Edo period, where this style of weapon was a common sight. In reality, it was mainly used as an ornamental item meant to show status among other men of high social standing.
Today they can be seen wherever there is a samurai statue or anything else related to Japanese cultures, such as martial arts clubs and some restaurants in Japan.

Sword canes, also known as walking stick swords or cane swords, are cane-like weapons that have a concealed blade inside of them. They are typically used as a self-defense weapon, allowing the user to quickly draw the blade in the event of an attack. Some people may also use these canes as display pieces or for ceremonial purposes.
It is important to note that the use of a sword cane or any other type of concealed weapon may be illegal in some areas, and it is always important to be aware of and follow the laws and regulations regarding weapons in your jurisdiction.
In addition, it is important to use caution when handling any type of weapon, as even a seemingly harmless cane can be dangerous if used improperly. They can be used for a variety of purposes, including self-defense, ceremonial purposes, and collectible items.
Some people carry these canes for protection, while others may use them for decorative purposes or as a part of a costume. They can also be used in martial arts training or demonstrations. However, it is important to note that the use of canes may be restricted or illegal in some areas, so it is important to check local laws before carrying or using one.
SHARE THIS POST
Previous Post
Next Post 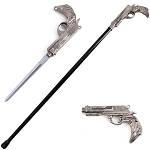 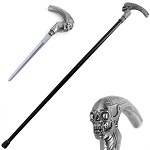 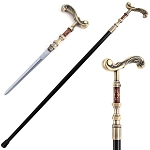 Nautilus Steampunk Handle Gentlemen Walking Cane Sword
Named after Captain Nemo's famous submarine, This is the 36" Nautilus Steampunk Black Steel Gentlemen's Walking Cane. This is a great cane with a sturdy black steel shaft and a silver finished metal alloy Alien Skull cane head. Hidden inside is a 12 inch stainless steel spear point blade for your protection. The bottom of this cane features a rubber stopper to help balance and prevent slipping.
$13.95
0
Out of Stock.