A Brief Explanation of the History of the Nunchucks

Nunchucks come with an interesting and fascinating history. Most of the weapons today look like new, but they are in fact very old.
Nunchucks or nunchaku is one of the most popular weapons these days in America. But, very few people know the history of the nunchucks.
Nunchucks include two wooden sticks that are connected with a chain. Sometimes, a cord or rope is used for connecting them. Also, at times, the two sticks are made of steel. 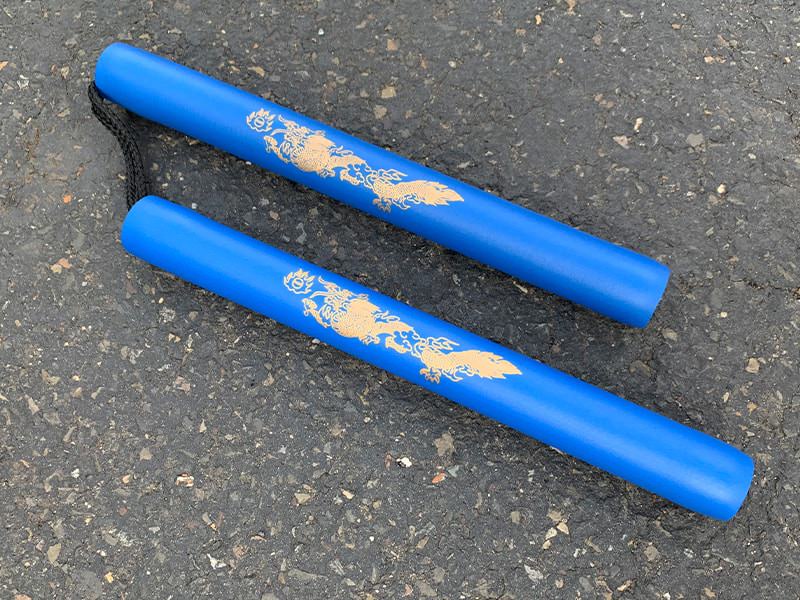 However, traditionally, the weapon was made of wood. Steel nunchucks are rather new or modern style weapons.
Since people are unfamiliar with the history of nunchaku, we feel it is essential to let people know how it was discovered. So, here is a brief explanation of the history of the nunchucks.

Dates Back to the 9th-10th Century

The history of the nunchucks takes us to the 10th century. It is unbelievable that it is such an old weapon. It was first used in ancient China and Okinawa during the 10th century.
The first ever nunchaku was a flail like weapon. It included two wooden sticks that were connected with horse’s hair. This Okinawan weapon was a pure agricultural tool till then, and wasn’t recognized as a fighting weapon.

Nunchaku was basically an agricultural tool. It was used in China as a tool for cutting and reaping different crops.
The Chinese villagers had constructed it, and it was a handy tool for reaping crops such as soy, wheat, and rice etc. As mentioned before, it contained two wooden sticks tied with horse hair.

A War With the Mongolians

The history of the nunchucks is quite inspiring. The Chinese still take pride in this weapon. The history of this weapon begins with a historic war between a Chinese emperor and the Mongolians.
During the 10th century, a Chinese Emperor of Sung dynasty named Jiu Hong Jun battled the Mongolians. It was a very intense war and ended in a heavy defeat for the Chinese.
As a result, the territory went to the Mongolians. They captured his territory and therefore, he had to march towards the Chinese Mainland territory.
So, he took his troops to the Chinese Mainland territory. This was where the Chinese villagers were using nunchucks for cutting crops.
He settled in a village and the villagers fed him and took care of his army. In return, the emperor ordered his army to assist the villagers in the agriculture work of the villagers.

One day the emperor Jiu Hong Jun was on a visit to the village to see how his troops were helping the villagers in their agriculture work.
While he was visiting the village, he discovered a weapon that looked like a flail and the villagers were using it for reaping different crops.
The emperor figured out that this can be a useful weapon for him and his army to battle the Mongolians. This was when he discovered nunchucks.
He took the weapon and went back to his residence. He learned different fighting techniques with the weapon.
Though it was an agricultural tool, but the emperor was enough to realize the lethality and potential of the weapon to be a great fighting and warfare weapon.

The Training of the Troops

After Jiu Hong Jun learned different fighting techniques with the nunchucks, he gathered his troops to train them as well.
He gave a nunchaku each to his troops. Then, he trained them with the fighting and defensive techniques he learned.
The training continued for some days. The emperor wanted to make sure that his troops become well-trained so that they can defeat the Mongolians.
Therefore, he asked his army to practice the techniques he taught them for as long as they feel they are ready to battle the Mogolians.

Remember that nunchaku was originally an agricultural tool. Nobody thought that it would become such a lethal fighting weapon.
After the Chinese defeated the Mongolians with nunchucks, it became a recognized fighting and warfare weapon. It was then adopted as a pure fighting weapon in this part of the world.
Nunchaku was then regularly used in wars. The soldiers used it against their enemies to defend themselves and injure their opponents.

Nunchucks were not as popular in the US until the 1970s. During this decade, Bruce Lee was on his peak. He was one of the most popular actors around the globe.
This is the part of the history of the nunchucks which is important for the Americans. The weapon became enormously popular in the US during this time.
Bruce Lee featured in many movies, and most of these movies featured the use of nunchucks. Every now and then, he was seen expressing his nunchaku skills.
He is still believed to be the most skillful user of this weapon. In fact, the weapon belongs to him. He was such an icon.
During his prime time, he came up with movies that included actions scenes involving nunchaku. He could use the weapon to fight the odds and emerged victorious.
He could easily handle and the weapon and performed different tricks with it as well. Some of his famous movies include Enter the Dragon and Black Dynamite.
Even today, a few movies include the use of this weapon, specifically those starring Donnie Yen.

The history of the nunchucks suggests that it was a very powerful weapon. That is why it was used for warfare.
Following that pattern, nunchucks is being used today for self defense and for practicing martial arts techniques. Martial artists learn defensive techniques with this weapon.
There are wooden and steel nunchucks used today for defending against the attackers. Steel chucks being more powerful and lethal.
In fact, it proves to be an extremely effective weapon for self defense. A couple of strikes can fend off the attackers and ensure your survival.
Also, the key advantage of using it for self defense is that it offers longer reach. With a long chain or rope attached to it, you can swing it from a distance.
You can stay at a safe distance away from the attacker and still defend yourself. This is what inspires the modern users to use it for self defense.
Nunchaku has now become a very popular weapon. It is being used in the movies and different TV shows.
Furthermore, it is also being used as a cosplay weapon. Specifically. It is used to play the role of Bruce Lee.
Tricksters perform tricks with this weapon and find ways to impress people. So, what we conclude from the history of the nunchucks is that it is unbelievable how an agricultural tool turned out to be a warfare weapon!
SHARE THIS POST
Previous Post
Next Post